The following books are recommended home reading opportunities for Year 11

Pride and Prejudice - Jane Austen
Pride and Prejudice, which opens with one of the most famous sentences in English Literature, is an ironic novel of manners. In it the garrulous and empty-headed Mrs Bennet has only one aim - that of finding a good match for each of her five daughters. In this she is mocked by her cynical and indolent husband.

With its wit, its social precision and, above all, its irresistible heroine, Pride and Prejudice has proved one of the most enduringly popular novels in the English language.

A Christmas Carol tells the story of a bitter old miser named Ebenezer Scrooge and his transformation into a gentler, kindlier man after visitations by the ghost of his former business partner Jacob Marley and the Ghosts of Christmas Past, Present and Yet to Come. The book was written at a time when the British were examining and exploring Christmas traditions from the past as well as new customs such as Christmas cards and Christmas trees. Carol singing took a new lease on life during this time. Dickens' sources for the tale appear to be many and varied, but are, principally, the humiliating experiences of his childhood, his sympathy for the poor, and various Christmas stories and fairy tales.

Recommended by the English Department as it is a set text at GCSE and pupils will benefit from reading it more than once. This will be English homework over the summer holiday. **

Rebecca - Daphne Du Maurier
Not since Jane Eyre has a heroine faced such difficulty with the Other Woman. An international bestseller that has never gone out of print, Rebecca is the haunting story of a young girl consumed by love and the struggle to find her identity.

Lord of the Flies - William Golding
A plane crashes on an uninhabited island and the only survivors, a group of schoolboys, assemble on the beach and wait to be rescued. By day they inhabit a land of bright fantastic birds and dark blue seas, but at night their dreams are haunted by the image of a terrifying beast.

The Woman in Black - Susan Hill
Arthur Kipps, a junior solicitor, is summoned to attend the funeral Mrs Alice Drablow, the house's sole inhabitant of Eel Marsh House, unaware of the tragic secrets which lie hidden behind the shuttered windows. The house stands at the end of a causeway, wreathed in fog and mystery, but it is not until he glimpses a wasted young woman, dressed all in black, at the funeral, that a creeping sense of unease begins to take hold, a feeling deepened by the reluctance of the locals to talk of the woman in black - and her terrible purpose.

The Kill a Mockingbird - Harper Lee
'Shoot all the bluejays you want, if you can hit 'em, but remember it's a sin to kill a mockingbird.'

A lawyer's advice to his children as he defends the real mockingbird of Harper Lee's classic novel - a black man charged with the rape of a white girl. To Kill a Mockingbird is a coming-of-age story, an anti-racist novel, a historical drama of the Great Depression and a sublime example of the Southern writing tradition.

All Quiet on the Western Front - Erich Maria Remarque
In 1914 a room full of German schoolboys, fresh-faced and idealistic, are goaded by their schoolmaster to troop off to the 'glorious war'. With the fire and patriotism of youth they sign up. What follows is the moving story of a young 'unknown soldier' experiencing the horror and disillusionment of life in the trenches. 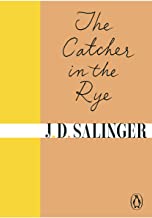 The Catcher in the Rye - J D Salinger
Holden Caulfield is a seventeen- year-old dropout who has just been kicked out of his fourth school. Navigating his way through the challenges of growing up, Holden dissects the 'phony' aspects of society, and the 'phonies' themselves: the headmaster whose affability depends on the wealth of the parents, his roommate who scores with girls using sickly-sweet affection. Written with the clarity of a boy leaving childhood behind, The Catcher in the Rye explores the world with disarming frankness and a warm, affecting charisma which has made this novel a universally loved classic of twentieth-century literature.

Frankenstein - Mary Shelley
Composed as part of a challenge with Byron and Shelley to conjure up the most terrifying ghost story, Frankenstein narrates the chilling tale of a being created by a bright young scientist and the catastrophic consequences that ensue. Considered by many to be the first science-fiction novel, the tragic tale of Victor Frankenstein and the tortured creation he rejects is a classic fable about the pursuit of knowledge, the nature of beauty and the monstrosity inherent to man.

The Time Machine - H G Wells
H. G. Wells' classic science fiction masterpiece The Time Machine explores human nature. The Time Traveller finds himself in 802,701 A.D., where he meets the peaceful Eloi and encounters the violent Morlocks. Wells uses these two descendants of man to explore evil and its causes, drawing conclusion that might surprise you in this riveting tale that has stood the test of time.

The Hitchhikers Guide to the Galaxy - Douglas Adams
It’s an ordinary Thursday lunchtime for Arthur Dent until his house gets demolished. The Earth follows shortly afterwards to make way for a new hyperspace bypass and his best friend has just announced that he’s an alien. At this moment, they’re hurtling through space with nothing but their towels and an innocuous-looking book inscribed with the big, friendly words: DON’T PANIC. The weekend has only just begun…

All the Truth That's In Me - Julie Berry
This powerful book is indeed truthful, an honest and beautifully written portrayal of a trauma victim and a family living in difficult circumstances. Important central themes of male dominance and unheard women’s voices underpin a gripping narrative.

Remembrance - Theresa Breslin
Scotland, 1915. A group of teenagers from two families meet for a picnic, but the war across the Channel is soon to tear them away from such youthful pleasures. All too soon, the horror of what is to become known as The Great War engulfs them, their friends and the whole village. From the horror of the trenches, to the devastating reality seen daily by those nursing the wounded, they struggle to survive - and nothing will ever be the same again.

A powerful and engrossing novel about love and war, from Carnegie Medal-winning author Theresa Breslin.

i Boy - Kevin Brooks
Before the attack, sixteen-year-old Tom Harvey was just an ordinary boy. But now fragments of a shattered iPhone are embedded in his brain and it's having an extraordinary effect...Because now Tom has powers. The ability to know and see more than he could ever imagine. And with incredible power comes knowledge - and a choice. Seek revenge on the violent gangs that rule his estate and assaulted his friend Lucy, or keep quiet? Tom has control when everything else is out of control. But it's a dangerous price to pay. And the consequences are terrifying. . .

Dead Time - Anne Cassidy
Rose and Joshua first met when Joshua and his dad came to live with Rose and her mum. Then their world turns upside down when their mother and father go out for dinner one evening and never return. With police inquiries going nowhere, Rose is dispatched to live with her chilly, unfriendly grandmother and Joshua is sent to live with his uncle. Then Joshua comes to London to study and Rose is witness to not one, but two murders. A taut and pacey thriller that is the start of a stylish new series from an acclaimed writer for teens.

Shelter - Harlan Coben
When tragic events tear him away from his parents, 15-year-old Mickey Bolitar is sent to live with his estranged uncle, Myron. For a while, it seems his train wreck of a life is finally improving - until his girlfriend, Ashley, goes missing without a trace. Unwilling to let another person he cares about walk out of his life, Mickey follows Ashley's trail into a seedy underworld, revealing a conspiracy so shocking it will leave him questioning everything about the life he thought he knew.

Dear Nobody - Berlie Doherty
The moving and very real story of two teenagers and an unplanned pregnancy. It is told from two viewpoints - that of Helen as she writes her thoughts in a series of letters to the unborn baby, the Dear Nobody of the title, and of Chris as he reads the letters and relives events as Helen is in labour.

Department 19 - Will Hill
In a secret supernatural battle that's been raging for over a century, the stakes have just been raised – and they're not wooden anymore.

DEPARTMENT 6 IS THE ARMY

DEPARTMENT 19 IS THE REASON YOU’RE ALIVE

It's Saturday, it's summer and, although he doesn't know it yet, everything in Adam Thorn's life is going to fall apart. But maybe, just maybe, he'll find freedom from the release. Time is running out though, because way across town, a ghost has risen from the lake... This uplifting coming-of-age novel will remind you what it's like to fall in love.

Confessions of a Murder Suspect - James Patterson
On the night Malcolm and Maud Angel are murdered, their daughter, Tandy, knows just three things: 1. She was one of the last people to see her parents alive. 2. She and her brothers are the only suspects. 3. She can't trust anyone - maybe not even herself. Having grown up under their parents' intense perfectionist demands, none of the Angel children have come away undamaged.

Returning to the genre that made him the world's bestselling author, James Patterson introduces a teen detective on a mission to bring her parents' killer to justice, even if it means uncovering her family's darkest secrets - and confessing some of her own.

The Help
Enter a vanished and unjust world: Jackson, Mississippi, 1962. Where black maids raise white children, but aren't trusted not to steal the silver . . .

There's Aibileen, raising her seventeenth white child and nursing the hurt caused by her own son's tragic death; Minny, whose cooking is nearly as sassy as her tongue; and white Miss Skeeter, home from College, who wants to know why her beloved maid has disappeared.

Skeeter, Aibileen and Minny. No one would believe they'd be friends; fewer still would tolerate it. But as each woman finds the courage to cross boundaries, they come to depend and rely upon one another. Each is in a search of a truth. And together they have an extraordinary story to tell...

Skin - A M Vrettos
Written through the eyes of a brother as he watches his sister fade away from anorexia and his parents’ marriage deteriorate, he is like a shadow in their lives and stays silent about his own problems. Sensitive and alert, he walks us through the pain, the sadness, of this complicated problem.

A Walk in the Woods - Bill Bryson